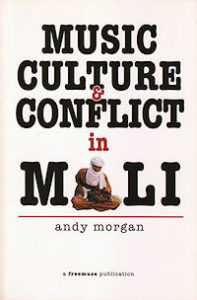 4. Mosques and Maquis 27
Religion, extremism and law and order in southern Mali

5. Music in the Red Zone 41
The Festival in the Desert and the advance of Islamism in the north

6. “Ali Farka would return to his grave” 51
The end of music in the north

9. Get Up, Stand Up! 71
Malian musicians protest and survive

10. When the going get’s tough, the rappers get going 81
Mali’s Facebook generation steps up

11. Without music, Mali will die 91
The musicians and cultural activists speak

12. In the name of Mali 103
The intellectuals and writers of Mali appeal to the armed groups in the north

13. “Only God can protect you” 107
Why do some Muslims want to destroy shrines and mausoleums?

14. Words of God, holy things and beautiful tales 121
The significance of Timbuktu

15. “We have come here to teach you the true faith” 129
Vandalism and destruction along the great fault line of the Sahel

16. “The knowledge they hold is inestimable” 145
Historic manuscripts and Africa’s memory

17. “Flames over the heart of the damned” 163
Writers, poets and the media in modern day Mali

18. “A mirror of the people’s aspirations” 185
Cinema and the political struggle in Mali

19. Showing another world 195
Koteba and the ‘Theatre of Resistance’ in Mali